Taste Music with the Pianocktail 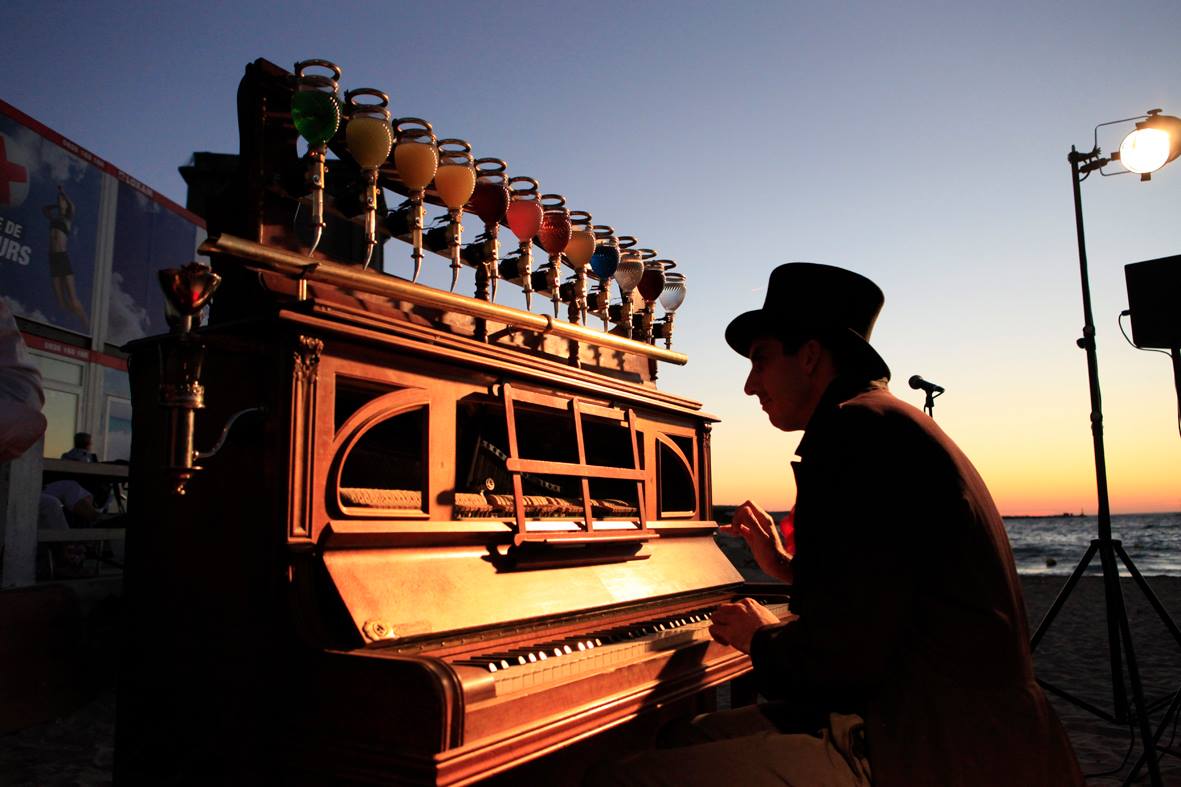 In his book L’Écume des Jours, the French author, singer, jazz musician and engineer Boris Vian invents the Pianocktail, a magical machine that turns any piano song played on it into a sophisticated cocktail transmitting the same emotions. This is a phenomenon called synethesia where multiple senses interact to form cross-modal experiences: associating sounds and numbers, emotions and colors, music and taste.

Can such a machine be called to life? One way is to map each note to an ingredient and to turn any key press into a few drops. With this simple method people have built wonderful machines. But this only creates graveyard cocktails, diverse mixtures of all the ingredients corresponding to the scale used in the song—not great. Instead, I worked on a more sophisticated implementation using recent machine learning methods. I call it TastyPiano a digital pianocktail turning any piano song into a cocktail recipe.

How does it work?

Associations between music and taste are of course subjective, which is why there is no objective perfect mapping between piano songs and cocktail recipes. On the other hand, a random mapping would be disappointing. So what are we looking for? Here are a few criteria that a pianocktail should satisfy:

Here, I scrapped 30k midi files of piano songs from the web and used them to train a self-supervised transformer model. I used methods from the field of natural language processing: a tokenizer from that paper, the BERT algorithm with note-wise masking, followed by a finetuning using SentenceBERT.

The tokenization transforms midi files into a sequence of tokens: pitch, duration, velocity and time-shift until the next note. Then, BERT masks up to 5 notes in a row (5*4 tokens) and trains to inpaint the masked information. This generates token-wise representations that are then aggregated at the song level with a mean pooling. SentenceBERT is then used to finetune song representations using a contrastive loss: the algorithm learns to find two music clips coming from the same song among 256 music clips. Doing so, the algorithm learns to represent musical styles and to represent music such that musical clips that could belong to the same piece are closer together. 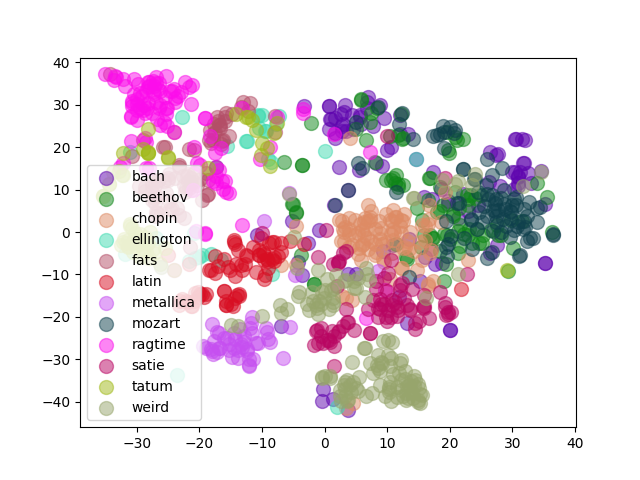 T-SNE of the music representation space for a few composers/musical genres.

Here again, I scrapped the web and obtained about 600 recipes all using ingredients from a pre-defined set of 35 ingredients. I then hand-defined a taste representation space by aggregating taste representations of ingredients in proportion to their quantity in the drink. Taste representations include 13 features: percentage of alcohol, estimated sourness, sweetness, bitterness, herbiness, fruitiness, oakyness, egginess, fizziness, spiciness, complexity (in terms of number of sub-ingredients), colorfulness and the final volume of the drink. All these are estimated after dilution, which itself depends on the cocktail preparation type (built, stirred or shaken) and the initial percentage of alcohol.

Up to this point, we can encode piano songs into music representations, further encode them into cross-modal representations with the translation VAE and decode taste representations. Now we need to generate full recipes.

To make sure that this is working, I can compare the distributions of taste features, number of ingredients, cocktail types, etc. between the dataset of cocktails and a distribution of cocktails generated by the pianocktail when run on 500 pieces of piano. After a few tweaks, this works quite well!

In addition, the pianocktail predicts a type of glass and a preparation type for the cocktail. With the concrete recipe, we have all we need to write a detailed recipe with instructions. You can try the app by clicking the button below. With a YouTube url, an audio file or a midi file, taste the music!